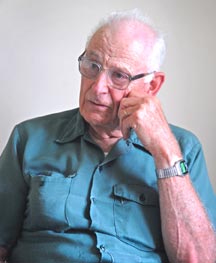 Stowe Land Trust founding & Emeritus Director, Merton Pike, passed away April 18, 2018. One year ago, we had the opportunity to sit down with Merton and learn about how SLT got started and the Pike's family farm.

Merton's vision, leadership, and hard work in support of protecting important and productive lands for our community helped make Stowe Land Trust the organization that it is today. Stowe Land Trust is honored to carry on his legacy through the protection and stewardship of lands in the greater Stowe community.

Merton Pike, now 97, is a retired farmer and a Stowe Land Trust founding & Emeritus Director. When Merton’s parents moved to Stowe in 1921, there were about 200 farmers in town. According to Merton, “If a person had a couple of dairy cows in those days, they were considered a farmer.” The Pikes started out farming and sugaring 200 acres along Route 100 where the family farm still is today. By the time Merton was six, he was charged with taking a horse and cart to deliver the farm’s milk to the creamery over a mile away on the Mountain Road. “I felt pretty big,” recalled, Merton.

By the 1980s, things had changed in Stowe. Farmland was being developed at a rapid rate and many residents were getting worried about the loss of open space. John McVickar – a local lawyer – had been inspired by attending several Land Trust Alliance national meetings and started gathering concerned citizens together to discuss what could be done. “John asked me to join in those meetings because of me being the chair of the Conservation Commission at the time and a farmer. So I went because of my interest in saving farmland,” said Merton. “The Mayo Farm wasn’t being farmed anymore and we were concerned that it was going to be sold and developed, so that was the main reason that John tried to get a land trust going – to prevent that from happening.”

According to Merton, it was John’s leadership and perseverance that ultimately led to the formation of Stowe Land Trust and the successful conservation of Mayo Farm – Stowe Land Trust’s first project. “He kept pushing for it and finally he got enough people behind him that he got it started. But for a while there it was kind of a one-man-show.”

That first project was just the beginning. John, Merton, and many others have and continue to lend their vision, leadership, and hard work in support of protecting important and productive lands for our community through SLT.  In reflection, Merton believes, “The Stowe community is quite anxious to support SLT. It wouldn’t have gotten so big and have done so many things in the past 30 years if people didn’t support it. I think Stowe Land Trust is here to stay.”