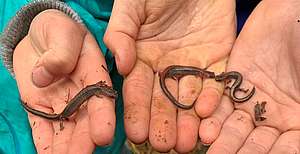 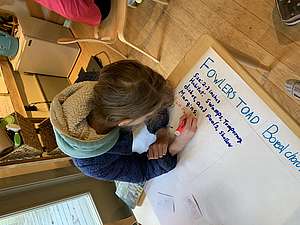 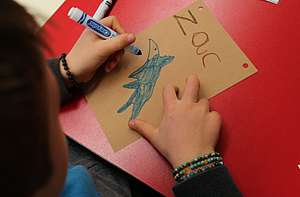 This past month, I had the opportunity to visit Mountain River School Forest class and the kindergartners at Stowe Elementary School!

I recently finished up a short unit at the Mountain River School on amphibians and reptiles in Vermont!

On April 26th, we visited the cover boards and unfortunately did not find anything under them! Although we did not find anything, we walked around Red Pine Forest and spotted some Eastern Red-backed Salamanders (Plethodon cinereus) ! In addition, I taught them a brief lesson on vernal pool monitoring in Vermont. The students were excited as they searched for more salamanders; they found 13 individuals of this species! We took this data and I uploaded it to the Vermont Reptile & Amphibian Atlas!

At the beginning of May during our last class session, we did an activity on endangered and threatened reptiles and amphibians in Vermont. The students were divided into three groups of two, and each group was in charge of researching several of Vermont’s endangered and threatened amphibians. Once the students completed their research, each group presented their findings to the class!

I had a wonderful time serving with Mountain River School and teaching them about Vermont’s herps! I get to see the Forest class again later this month for a visit to Wiessner Woods!

In addition to my time at MRS, I visited the kindergarteners at Stowe Elementary School last week! I read a fun book about nature observations called Tiny, Perfect Things by M. H. Clark and with awesome illustrations by Madeline Kloepper. Students made nature journals, where they drew pictures or wrote about their favorite animals and something that reminds them of nature. Then we went outside and the students recorded their own observations! We sat and looked at the environment around us. The kindergartners are SO creative and made great observations!

In few weeks I will be returning to Stowe Elementary School, where we will learn about how to identify common Vermont birds by sight and sound!