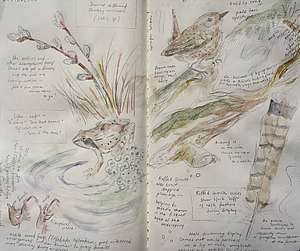 Noun. the study of cyclic and seasonal natural phenomena, especially in relation to climate and plant and animal life*

Growing up, my family kept a nature notebook where we would document our favorite observations every day. At the time, I don’t think I realized that we were participating in a long-standing tradition of phenological nature observation. An observatory practice that, although not always named as such, spans the duration of human history. In the past several hundred years it’s played and continues to play an important role in ecological research. Looking back at our notebook, I can compare changes over time, recognize patterns, and simply rejoice in our observations.

Keeping a list with specific dates of observations can be achieved through several different formats, I currently keep notes of times, dates, and other details logged in a small pocket notebook I carry with me throughout the day. To start your own list, a simple sheet of paper on your refrigerator would do the trick, as would digital note-taking or use of apps, such as iNaturalist or eBird. Besides the date, names and details of the observation are key, but even if you don’t know the species, “yellow flower, 1” wide, reminds me of a small, flat dandelion, growing next to the driveway” is still an excellent observation!

Sometimes when keeping a list, only the first time something is observed in a given year is recorded, or only the happenings of a certain location are documented, but ultimately it’s up to what you’d like to achieve by keeping a calendar, list, or journal of your observations. Grab some crayons and add some decoration or illustration, and consider making it a daily family activity -- before dinner, have everyone write down a new observation and share them with one another. Each week, I'll be sharing a summary of my observations here on the blog. Let us know what you've been seeing!

Even right outside of our doors, spring is making steady progress forward. April has been ushered in with heavy rain, snowfall, and a few brightly sunny days. At lower elevations, the first of the flowering trees and shrubs have just started to break floral buds, utilizing the open breeziness of a leaf-free canopy to carry out wind pollination. I am tucked away at home, nestled against the mountains at an elevation of 1600’ on a northwest facing slope, which has yet to show any signs of open floral parts save for the first of the Coltsfoot. The developing catkins of the willows are still thickly gray and soft, the maples and poplar are only beginning to show signs of swelling buds.

Mornings begin with a flurry of bird activity, and human-made alarm clocks are now superfluous. The calls of winter Chickadees have given way to fresh song, the American Robins and Red-winged Blackbirds returned weeks ago, now, when snow was still a constant upon the landscape, and are busy shouting out claims to territory. This week has been a continuation of constant Winter Wren song emanating from tip-ups in the forest, their tiny bodies producing one of the longest and most clear sounds in the landscape, as the unmistakable thump-thump-thumpthumpthump of a Ruffed Grouse’s wingbeats echo through forest air from where he displays atop a moss-draped boulder.

Down at the pond, the Wood Frogs gather once again, attaching masses of eggs to the vegetation. They quieted at my approach, but resumed a few minutes later when I’d stayed still and silent in observation. When two Chipmunks ran nearby, rustling in the leaves and chasing one another, in an instant the surface of the water became still as the frogs hushed their song, save for the concentric ripples of an occasional raindrop.