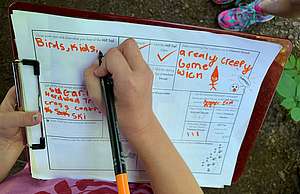 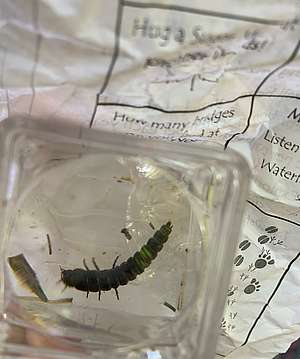 Bugs found during the sweep 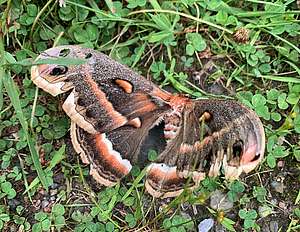 Earlier this week, I had a fun hike with Wiessner Woods with the Stowe Department of Parks & Recreation group! Each group did a different activity around Wiessner Woods - some groups played games, swept for bugs (we found some cool species!), did the "Stowe Land Trust Explorer's Adventure" scavenger hunt, and walked around the property.

On our way through Wiessner Woods, we looked at the newly installed interpretive signs that taught us about the plants on the property. Some signs that stood out to the campers included: Yellow birch (Betula alleghaniensis), Striped maple (Acer pensylvanicum), and a variety of ferns.

The group I was with continued to the gnome home, the sugar house, and walked the meadow trail. During our walk we tried to fill out as much of the Explorer's Adventures page as possible! Some of the campers loved drawing and writing, and made some great observations (such as the really creepy gnome witch!).

Today I had a great outing with the MudCity Adventures “Day Adventurers” group! We walked Alex’s Trail, swam in the Little River, and looked for critters along the shore. It was a nice humid day, perfect to spend time exploring the water!

We started off by playing a short game of bat & moth – a game that explores how bats use their hearing instead of their eyesight to find prey (also known as “echolocation”). Echolocation helps animals such as bats, dolphins, and some species of birds forage for food or navigate in the dark. Echolocation works when animals make noise – the noise bounces off of these objects and come back to the animal. Hearing the echo helps the animal detect the distance between them and the object.

After playing this short game, we walked Alex’s trail and hit the water for a quick swim and water exploration. At the water, campers picked up rocks to find critters and used magnifying glasses to look at cool things. Some of the critters we found are: Stoneflies (Order: Plecoptera), beetles (Order: Coleoptera), a Leopard Frog (Lithobates pipens), and an Eastern newt (Notophthalmus viridescens). The Day Adventurer group is a creative bunch, and turned the invasive Japanese Knotweed (Fallopia japonica) into snorkels for swimming, musical flutes, and as a base for art projects.

On our way out of DuMont Meadow, we took a leisurely stroll back to the MudCity vans and found this giant silk moth – a Cecropia moth (Hyalophora cecropia) – the largest moth in North America!

I had a great time with MudCity and can’t wait to see them again next week!