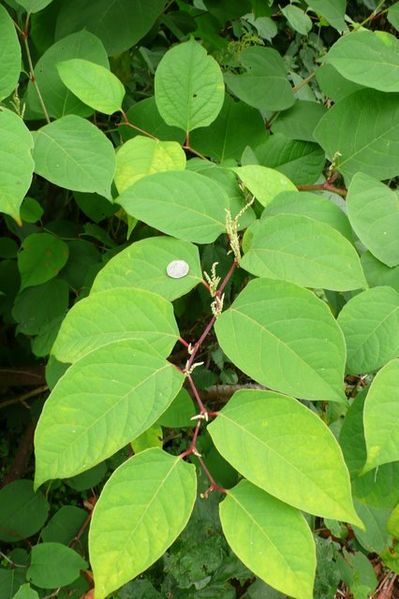 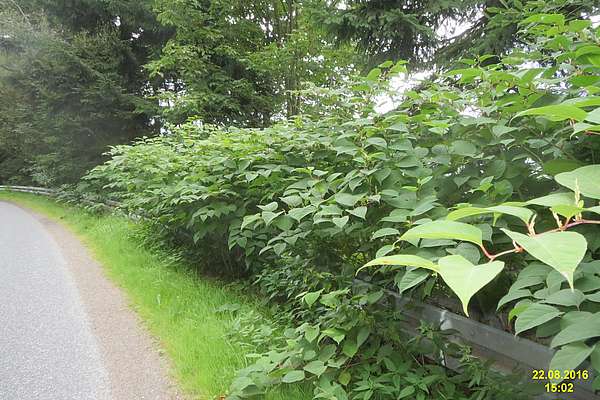 Hello everyone! Hope you are finding ways to beat the heat this week and still finding fun ways to get outside and explore. I was exploring Sunset Rock recently by my office building and noticed a large area ,near the trailhead on Sunset St., that was overcrowded with Japanese Knotweed (Fallopia japonica). Japanese knotweed is an noxious weed that poses a serious threat to native plants. Its ability to crowd out other species is unparalleled and it can quickly degrade native plant and animal habitat.

Japanese knotweed is native to Japan, China, and parts of Korea and Taiwan. It was introduced to North America probably in the late 1800s as an ornamental plant, where it was sold in nursery catalogs all over the United States. Knotweed was also commonly used as a form of erosion control or landscape screen. It can now be found throughout the eastern United States, several western states and is becoming widespread throughout Vermont. Commonly found around waterways, wetlands, riparian forests, and disturbed areas, these invasive plants can easily take over an area and choke out the native plants within a few years.

Japanese knotweed has long, thick, underground stems called “rhizomes” which are its primary means of spread. These rhizomes are capable of producing new plant populations rapidly; often resulting in thick colonies of the species. These rhizomes are also why knotweed is difficult to get rid of. Only a fragment of a rhizome from a knotweed plant is needed to grow again. These fragments have even been known to contaminate soils that the knotweed has been removed from, making it very difficult to remove all the knotweed in an area effectively. Here in Vermont, plows have been known to spread the invasive plant around as it will often grow along roadways in the state. If you see Japanese knotweed on your property, here are a few things that you can do to prevent their spread:

Manual control consists of digging out the rhizomes, cutting the stalks, or putting a tarp over the infected area during spring to smother the plants; however, digging is very labor intensive and can promote further invasion by spreading the rhizome fragments. Smothering will also kill off all the other plants under the tarp as it doesnt allow anything to grow underneath it. Successful eradication is not likely with cutting or smothering alone; it may require a combination of cutting, smothering and applications of herbicides.Severe infestations will require several attacks throughout the year to genuinly eradicate the species from an area. Check out this website for more information regarding manual control methods.

Chemical Control is best utilized through a professional source, however if you wish to DIY and tackle the infestation on your property here are a few helpful hints.

More information about utilizing herbicides against knotweed safely can be found here. We politely request for people to leave invasive management on Stowe Land Trust Properties to the land trust. If you spot any new/large patches of knotweed popping up on a SLT property, feel free to give our Summer Naturalist a call at (802)253-7221.