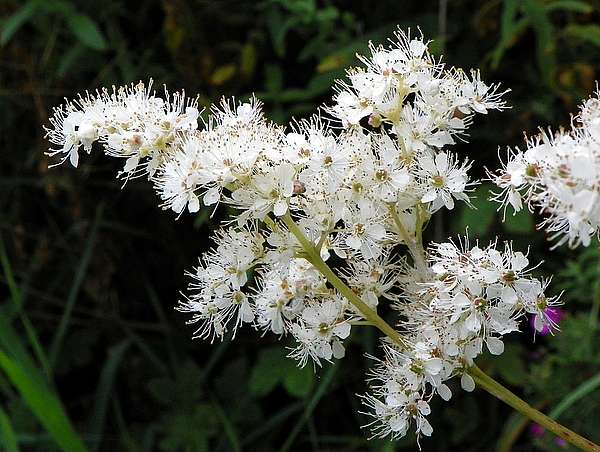 Filipendula ulmaria or Meadowsweet is an perennial herbaceous plant in the rose family. It tends to grow in damp meadows and blooms from June to September with tiny creamy white flowers that can turn several shades of purple. While not originally native to North America, it was intoduced several hundred years ago and since has become naturalized in the area.

Several insects utilize the plant for food such as Emperor Moth, and many more are attracted to the creamy white flowers they bear. Great for borders as they attract many pollinators such as bees and flies but are not attractive to deer or rabbits who rarely browse them. These plants are also very fragrant even when dried and can be used throughout the home.

Summersweet has a variety of uses other than just looking beautiful. Summersweet contains a compound which is known as Salicylic acid, which was used to make some of the first aspirin medication in the late 1800's. Considered one of the three most sacred herbs by ancient european druids, it has been traditionally used as a treatment for acidic stomachs, rheumatism, fever, and gout. The dried flowers were once strewn across floors to perfume homes and remove smells. The Anglo-Saxons even utilized this plant to flavor mead. No wonder people held this magical plant in such high regard!