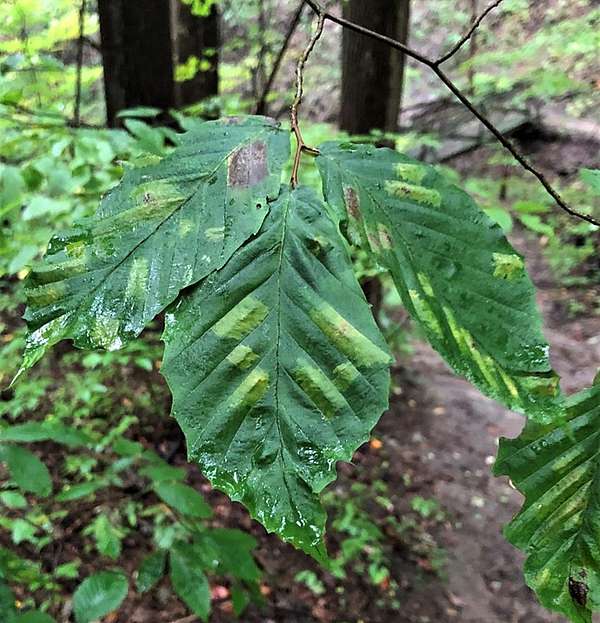 This is a beech seed pod or beechnut. They look remarkably like a small chestnut seed pod and are an important food source for many species of animal in our northern hardwood forests such as wild turkey, black bear, and white-tail deer. Black bears will even climb beech trees to reach these delectable beechnuts. You may be familiar with beech trees from the golden leaves that hang from their branches during fall and refuse to drop during the coldest months of the year. Or from their smooth bark that is often easy to spot among the more heavily ridged bark of trees dotting the landscape. Often, it is hard to find a forested area in Vermont that does not have beech trees somewhere within. It has become a symbol of modern northern hardwood forests. These symbols, however, are being threatened.

Beech trees have been attacked over the past century due to a disease known as Beech Bark Disease (BBD). BBD is a complex disease which forms from the combination of an invasive scale insect and two species of fungi. The fungi will manifest itself in the lesions caused by these insects which becomes mottled with black lesions and bumps. While not directly responsible for mature beech death, this fungus has been known to cause significant stress to mature beech trees and mortality among the saplings. In the past a beech tree could easily live to be around 400-600 years old, now one is hard pressed to find any beech tree above 80-years-old.

If that was not enough, a new disease has been witnessed ravaging beech populations in North America and is expected to be widespread in the Northeast relatively soon. Beech Leaf Disease (BLD) was first discovered in Ohio in 2012, and since has been detected in Pennsylvania, New York, Connecticut, Massachusetts, and Rhode Island. It effects both American and European beech species, causing leaf deformation, dieback, and potential mortality of infested hosts.

It is caused by a nematode that lives within the leaf that make the leaves near branch tips to become curled or shriveled, discolored, and deformed. The nematode can stress the tree and cause premature leaf-drop or dieback which can lead to decreased production of leaves and buds. Leading to the eventual death of the tree, generally due to stress. Pair beech leaf disease (BLD) with beech bark scale disease (BBD) and it is a recipe for disaster. Help us to cultivate this dying breed and keep the diversity of our forests alive. Check out these great resources for more information regarding beech trees, the diseases that affect them, and the best ways to cultivate them.