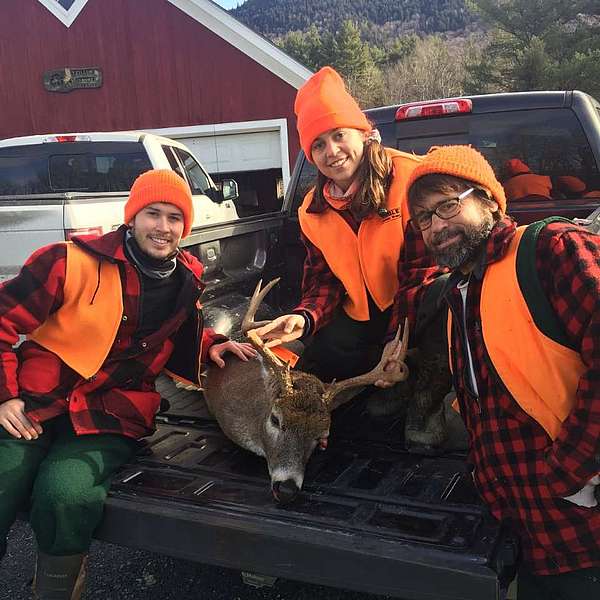 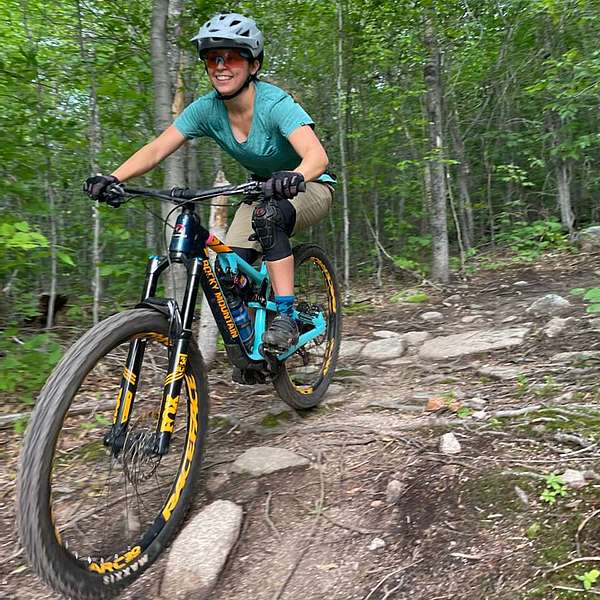 Kelli Grimes on the trail

Connecting with family and place in Brownsville Forest

Like a lot of 20-somethings living in Burlington, Kelli Grimes likes to spend her weekends riding mountain bike trails all around Vermont.

A mechanical engineer by day, Kelli is also an avid outdoorist who is passionate about maintaining the privilege of getting to use public land and trails. Last year, she served as an Ambassador for the Vermont Mountain Bike Association, advocating for access and coaching fellow riders how to ride with respect for other trail users and the environment. Kelli’s love of the outdoors can be traced back to her childhood in Morristown and hunting with her dad in Vermont’s woods.

Hunting connects Kelli to her family and to the lands they call home. Like many Vermonters, it is a way to share time together outdoors, to put good food in the freezer, and to keep a close relationship with the land and wildlife.

One of Kelli’s first memories of hunting is her dad, Kenny, taking her to what is now Brownsville Forest—a 758-acre tract of land that was purchased and conserved as state forest land by SLT in 2019. “I was about 10-years old. I remember hiking up [Hollis-Brown Mountain],” she recalls. “It was exhausting.” But for Kelli and her dad it was special to be out in the woods together as a family. It meant a lot to Kenny that he could take his kids to the same place his dad took him as a child and have the same experiences he did growing up.

A family connected with the land

Kelli’s dad, Kenny, started hunting in Brownsville with his father, Kenneth, when he was just seven years old. Kenneth was born on the land during the Great Depression, when it was still his family’s hill farm. The large and close-knit family got by with a small herd of dairy cows, sugaring, and selling timber. Money was scarce and there were constant worries and hardships, but it was life rich in time outdoors close to the land and family.

In 1950, the family could no longer make ends meet on the farm, so they sold their 750+ acres and moved to the neighboring town of Hardwick. The new owner, Mrs. Story, gave permission to the Grimes family to come back and hunt, allowing them to keep up a connection to the place they grew up.

“Kelli’s grandfather was never a very successful hunter, but he really enjoyed being out on the land with his kids,” says Kenny. “Hunting in Brownsville together, he would tell me stories about his childhood living up there and point out where they kept the cows and where the barn was.”

When Kelli was in elementary school, Mrs. Story passed away and her family posted the land and the Grimes’ lost access. “I didn’t understand why,” recalls Kelli. “I just knew we couldn’t go there anymore.”  Kelli’s experience resonates with many. With development pressure on the rise, the loss of land access for Vermont families has increased. In 2019 while Kelli was away at getting her degree at Clarkson University, their old family land went on the market for $10 million.

“We worried about what was going to happen to it,” recalled Kenny. “The fact that it was in Stowe and with the way Vermont is changing, we knew it could easily become another private development.” The Grimes’ knew firsthand that you can’t take access to land for granted, and that it was important to save places where the next generation can build a love of the outdoors.

They were not alone in this sentiment. In response to the sale, hundreds of local families—both newcomers and long-time residents—came together to support SLT’s purchase of the land and its addition to the surrounding state forest. Thanks to their support, the old Grimes family hill farm was protected and reopened to the public for hunting, walking, and skiing in July 2019.

Getting back on the land together

Last Thanksgiving, the Grimes family gathered at Kenny and his wife Sue’s home in Morristown like they always do. By then, Kelli had graduated, found a job in Vermont and was living close by in Burlington. When they were thinking about where to go for their traditional Thanksgiving Day hunt, Sue suggested Kenny take the kids back up to Brownsville for the first time in more than a decade. On that first return hunt, Kelli saw the mountain again and remembered the view from her childhood. “It was an easier climb, but still exhausting.”

Kenny was sitting right next to her when Kelli successfully shot a 175-pound 8-point buck. This would be a proud accomplishment for any hunter, but what was most important to Kelli and her dad was being able to share the experience together on the land that had so much meaning for their family. “It was really special to be able to take my kids up there again. Now the next generation will have a chance to experience the land like I did growing up.”