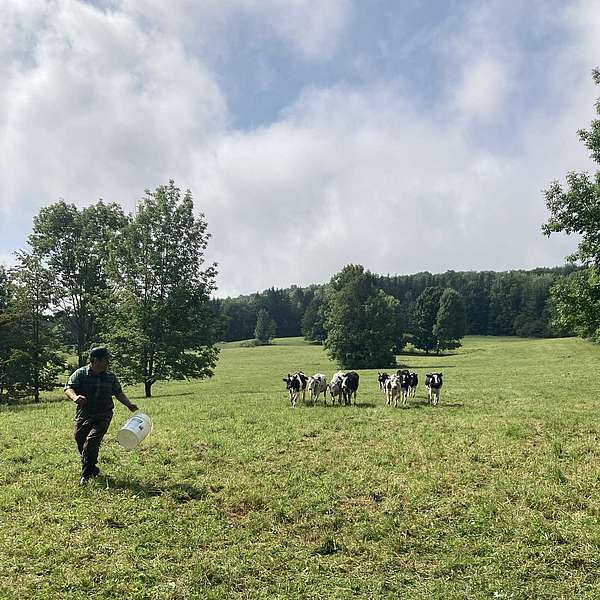 Ryan Percy calling in the heifers in August, 2021.

A Year in Lamoille County Farming

While the pandemic puts an even greater emphasis on supporting local farmers and buying sustainable agricultural products, a dairy industry consolidating suppliers, a rush to preserve farmland and unwelcome innovation in the world of manure marked the year in farming in Lamoille County.

Larger dairy farms in the area are persevering, but a consolidating industry and shifting consumer preferences are posing challenges.

In October, dairy company Horizon Organic announced it was cutting ties with 89 dairy farmers across Vermont and New England.

This included Morristown’s Rooney Farm, a 50-head dairy operation that now must find another buyer for its product, simply a sign of the times when massive suppliers are looking to purchase from massive producers.

“This was a total shock to us,” Selina Rooney, whose grandfather started Rooney Farm, said. “We have nobody to take our milk after Aug. 31.”

Even larger dairy farmers, like the Percy’s in Stowe, have been struggling with the price of milk and dreams of a more localized milk supply system.

“There needs to be a place to sell besides the price nationally,” Ryan Percy said in November. “There also needs to be people that are looking to, of course, buy milk in the Northeast.”

Farming in Lamoille County in general is trending smaller with more of a focus on local produce and food products that many residents support with their wallets.

Farms have gotten smaller in acreage across Lamoille County since the 1970s, according to the Vermont Agency of Agriculture and newer operations also tend to be more focused on a ultra-efficient, space-maximizing, sustainability-focused, localized form of production and distribution.

The Long Winter Farm in Stowe’s Nebraska Valley embodies this new tradition of farming and surging pandemic demand has pushed this small operation to the edge.

“It was a pretty nutty farming year during the pandemic,” Annie Paradee said in November. “Demand was just insane, and we were just trying to survive.”

The Stowe Land Trust’s ambitious initiative of the year has focused on conserving the Ricketson farm, a 217-acre swath of farmland abutting Route 100 north of Stowe.

The farm has been in the Ricketson family for over 100 years and the land trust is looking to keep it that way.

And that’s no simple feat. The COVID-19 pandemic helped spur a real estate rush in Stowe that has the housing market bursting at the seams and land in the area has become even more of a hot commodity.

In August, an unknown buyer purchased 185 acres of land on Edson Hill in Stowe for a record $33.7 million dollars, an outlier land acquisition but an indication of the direction land value has been trending.

The land trust is pulling out all the stops and looking to privately raise over a million dollars to protect the land. Ken Ricketson himself has contributed a large sum toward this goal and the Vermont Housing and Conservation Board has contributed $1.063 million, but it’s still uncertain whether the Stowe Selectboard will approve an additional $200,000 toward the conservation of the land.

Now, the land trust is just $100,000 away from reaching its private fundraising goal and unlocking an additional $200,000 grant, but the clock is ticking. The money must be raised by March 2022.

“I don’t think people really know what agriculture really is anymore. They have a Norman Rockwell image of that little barn.”

On the other side of Smugglers Notch, in Cambridge, residents of the town and owners of Boyden Farms memorably raised a stink this past summer when Mark Boyden attempted to spread human septic waste on his fields abutting the Lamoille River.

Boyden’s reasoning on the matter was clear: he was making productive use of human waste as a cost-effective source of manure that would otherwise overburden wastewater treatment facilities.

The people of Cambridge, including the town selectboard, did not see it that way and ultimately forced Boyden to abandon his septic sludge spreading.

“I never could have imagined that a neighbor would do this to us,” Karen Denniston said at a July 13 selectboard meeting. “I assumed that Mark Boyden was going to permit something that would look like agriculture. This is nothing like agriculture.”

Those who spoke out against Boyden included over a dozen Cambridge residents, George and Bill Putnam — a selectboard member and his brother, who sold Boyden the land he was spreading manure on in the first place — and Larry Wyckoff, Boyden’s own cousin and a selectboard member.

Concerns ranged from the smell or the liquid human waste, which smelled no worse than other animal manure, to the frequency of trucks traveling past neighbors’ homes to objecting to the use of human waste for the purpose of agricultural manure.

“I don’t think people really know what agriculture really is anymore. They have a Norman Rockwell image of that little barn,” Boyden said in July. “Being a local farm that has 40 or 50 cows, when you go to sell, you’re competing against people for the same shelf space who are at much lower cost. Even if what we do looks big, we’re so tiny compared to our competitors and our costs are so high.”