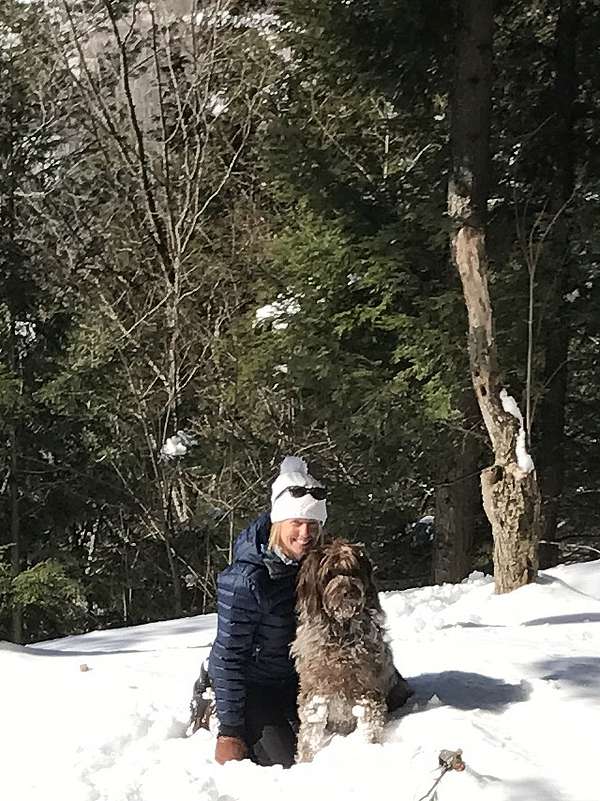 Meg Kauffman and her dog at Sunset Rock

Meg Kauffman and her husband decided to relocate to Stowe from the Boston area in 2003 because they had grown weary of long commutes and interminable lines of traffic. They wanted a simpler, more relaxed lifestyle in a quintessential New England town, without limiting their children’s' academic and recreational opportunities. Once they moved into their home in Stowe Village, Meg quickly discovered the wooded trails and scenic vistas of Sunset Rock at the end of her street. Walking her dog there became a regular routine that she couldn’t imagine living without.

A local real estate agent and community volunteer, Meg joined the Stowe Land Trust Board in 2013. One of her first tasks was to prepare a short presentation on a conserved property and she picked one of her favorites: Sunset Rock. As she read through old files and news clippings, Meg learned that a previous owner had proposed a 23-home development for the property and that other plans for development had been in the works up until the land had been purchased by SLT in 1999. Instead of hosting public trails, the community natural area could have become a private enclave of homes, drives, and yards all closed off to visitors. Instead of being the beautiful backdrop to Stowe Village, Sunset Rock’s hillside could have been riddled with houses. Meg began to realize how much she and others in the community took Sunset Rock for granted and how fortunate we all are that it is conserved.