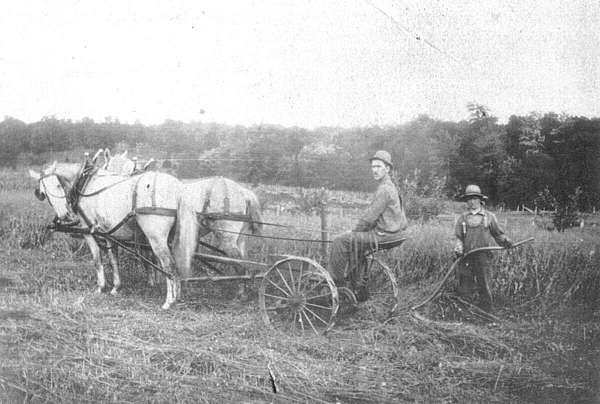 The former Gale Farm along Route 108. Photo courtesy of the Stowe Historical Society

Editor's Note - This article is part one in a three-part series on the past, present and future of farming in Stowe.

“When they first bought it, it was sheep,” said Morrill. “We still have sheep wire out in the woods and rolls of the wire on the edge of the field.”

When Morrill’s ancestor, Samuel Brush, bought the land at the top of the hill in the 1860s, the pinnacle of sheep herding in Stowe had already passed over a decade before.

“We had the high point of sheep herding in Stowe was just before 1850,” said Barbara Baraw, president of the Stowe Historical Society. “After that, those who did have sheep were breeding them. And also, this is to be sold as high bred animals, the use of them for food and for wool was minimal.”

Though Brush may have purchased the farm his descendant still lives on in the mid-19th century, it was at the turn of the previous century when the first ancestral Morrills, English immigrants to the very young United States of America, came to Stowe, then the edge of the settler frontier, for land speculation and to live a more agrarian lifestyle away from already-burgeoning cities.

“At the beginning of the 19th century, it was almost all subsistence farming, and the only cash product was potash,” said Baraw. “It was taken down to Boston and taken up to Montreal.”

Potash is the remnants of slow-burning wood boiled down into a concentrated lye product. It was used in many industries at the time, including tanning, candles and soap. Many homesteads in the early days only owned a couple cows, and the agriculture was localized with an informal system of neighborly interdependence.

The potash industry remained a component of the Stowe economy through the War of 1812 into the 1840s. The first merino sheep arrived on the shores of the United States in 1811. Only a year later, herds of the wooly beasts were being herded in Stowe. But by the 1840s, the denuded landscape from over-pasturing made it more profitable to herd sheep out west.

As the industrial revolution gripped eastern cities in the mid-19th century, the rise of pollution and crowding allowed towns like Stowe to establish themselves as pastoral alternatives with clean air and wide-open land.

After a major hotel established itself in Stowe village in 1863, others followed, and the agrarian economy of Stowe shifted to accommodate it. Herds of cattle expanded. Poultry stock grew. Growing demand needed to be met locally.

“When you think that the hotel on Main Street accommodated 400 people, just think about how many eggs and bottles of cream to make the dinners. The hotel in the summertime was supplied by most of the local farmers,” Baraw said.

Growing popularity as a place to get away from it all allowed the state in general and, Stowe in particular, to export that brand. One of the biggest exports after 1870 was artisanal cheese and butter boxes.

Though liquid milk began being shipped out of the state by the 1880s, it wasn’t until the early 20th century that dairy farming, combined with the rise of creameries, became the driving industry in the region. Three major facilities cropped up in the Stowe area in the 1920s and ‘30s, including Mansfield Creamery.

The Morrill farm became dairy-focused, just as it remains today. The Ricketson family, whose descendants are now partnering with the Stowe Land Trust to preserve their farm, also purchased their dairy farm in 1916.

Dozens of families purchased or started new farms in the 1920s as demand for dairy grew, spurred by marketing and a great appetite in the United States for milk. The federal government stepped in to regulate milk starting in the 1930s, and those efforts expanded after World War II, only further solidifying milk’s dominance in America.

The first half of the 20th century was a time of great change for farmers across the country and in Stowe. Morrill’s father, Paul, was born in 1915 and saw much of these changes firsthand, as horse-powered labor gave way to the early steel-wheeled tractors.

Some farmers, like Morrill’s grandfather and namesake, were attached to their horses and had a difficult time giving them, but others readily embraced new technology.

“My grandfather was good with the horses, but my father didn’t care for the horses. I think he was glad he was acquiring farm equipment,” Morrill said. “My grandfather kept the last two work horses they had, he just kept them and never sold them. They died here on the farm.”

New regulations in the 1960s required farmers to store milk in costly bulk tanks, or storage containers that keep and cool large amounts of milk and pushed farmers to increase herd size to be able to afford the equipment. This squeezed out smaller dairy farmers, but the Morrills and few others kept up and stayed in business.

With the farm crisis and herd buyouts in the 1980s, changes in dietary preferences away from dairy consumption in the United States, and consolidation as the path to survival, farming faded. The rise of Stowe as a resort town, beginning with its popularity as a skiing destination in the 1920s, has assured that an appetite for development will always threaten the farmland that remains.

According to Stowe Land Trust, when the Ricketson family purchased their farm over a century ago, Stowe was home to more than 200 farms. Though the number of farms in Lamoille County has grown since the 1970s and the average acreage of those farms has shrunk, only a handful of farms remain in the town of Stowe, according to agricultural census data.

Many, like the Morrill farm on Brush Hill, or the Pike, Percy and Ricketson farms, are family operations with strong lineage and increasingly rely on efforts from organizations like the Stowe and Vermont land trusts to ensure their land remains farmland, with or without them.

The Morrills remain committed to dairy, an industry that, though it lasted longer than the sheep craze, has not been without its complications. Some reasons for staying on Brush Hill are simpler than others, however.

“It’s peaceful up here,” Morrill said. “I think that’s why we like it and why we stayed here.”