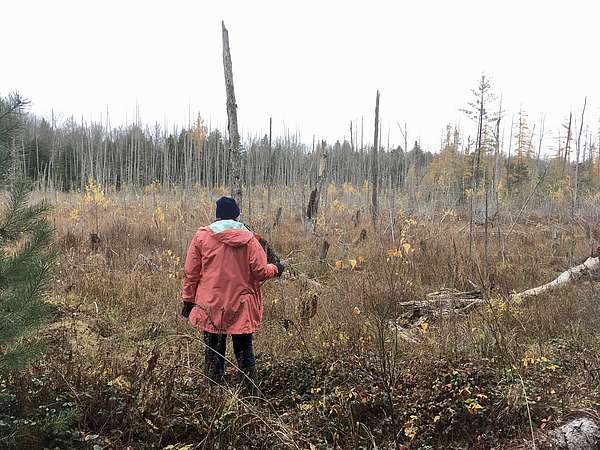 Rita Ricketson marvels at the bog on her family's farm along Route 100 in Stowe.

Editor's Note - This article is part two in a three-part series on the past, present and future of farming in Stowe.

In 1916, a dairy farmer from Saskatchewan by way of New York named Arnold Ricketson visited family in Morristown and, liking the area, decided to purchase a dairy farm, complete with a herd of Holsteins, in Stowe for $11,000.

Today, his grandson, Ken, still lives on and works the land that became the Ricketson farm over a century ago. Though he has stepped back from a full-time dairy operation, crops like hay and corn are still being harvested and some heifers can still be seen in their pen along Route 100.

This is a crucial moment for the Ricketson farm. Ken’s father, Harold, died at the age of 99 in 2014 and his uncle, Kenneth, died at the age of 103 in 2013. While three generations of the family have stewarded the farm, there’s no guarantee the next one will. Without intervention, it’s entirely possible that what has long been farmland could be ceded to developers.

Stowe Land Trust, along with the Vermont Land Trust, would rather see a different outcome and is looking to raise $2.5 million in order to conserve the 217-acre property.

Ken Ricketson himself has contributed a large sum toward this goal and the Vermont Housing and Conservation Board has contributed a hefty $1.063 million to the cause as well, one of the largest grants the organization has ever awarded to conserve farmland.

“We all love having farms and farming as part of our community — even if we rarely stop to consider just how important they are,” said Kristen Sharpless, executive director of Stowe Land Trust. “Local farmland is an iconic and beautiful part of our landscape, a connection to where our food comes from, and an irreplaceable resource we can’t afford to lose in the face of climate change.”

Sharpless and the land trust are asking those who care about balancing Stowe’s resort community with its pastoral beauty to step up and chip in with a donation of any size.

Since it was founded as the Friends of Stowe Conservation by John McVickar, Trow Elliman, Charlie Burnham and Merton Pike in 1987 in order to protect the imperiled Mayo Farm during an era of accelerated development and land sales, the Stowe Land trust has conserved 11 farmland properties, including Bouchard Farm and Long Winter Farm, totaling 775 acres. Approximately 500 acres of that is farmland and the rest a mixture of forest and wetlands.

In total, the land trust has conserved 4,300 acres of farmland, forestland and land for recreation.

The view from the field farmed by Ken Ricketson, nestled in the Lamoille Valley just north of Stowe village and south of Morrisville, is expansive.

With Mt. Elmore to the east and Mt. Mansfield towering in the west, it’s difficult to look out upon the ridgeline without feeling some fellowship with the farmers who cultivated the land, not just through the Ricketson century, but stretching back to the area’s settlement. Even with a busy highway nearby, the fields themselves feel peaceful.

A section of forest borders the farmland from which the occasional bear will pop out to snack on ears of corn. An old sedan riddled with buckshot is parked among the trees, the kind of feature no authentic farmland is complete without.

Hidden within the forest is a peat bog, a rare environment for the area and extremely valuable from a conservation standpoint. According to Sharpless, bogs are more common in the Northeast Kingdom, the product of kettle holes shaped by the glaciers that covered Vermont eons ago. This process resulted in an acidic and anaerobic landscape.

At first glance, the bog appears to be a hostile environment. The gray trunks of desiccated pine trees mark its border and each footstep sinks into the reserve of water below. But closer inspection reveals it to be teeming with unique flora. The smell of the bog gives it away: a sharp, acidic odor that implies something simultaneously rotting and very much alive.

Sphagnum moss carpets the sodden peat. Purple pitcher plants, their cup-shaped petals perfectly formed to trap and digest insects, sprout across the area. Wild cranberries grow among the moss. Unique varieties of dragonflies, butterflies and other organisms thrive specifically in this environment.

For Rita Ricketson, Ken’s sister, the bog is a special place. She would visit the area often with her mother, who treasured the area, when she was a young girl. Her mother would warn her not to visit the area alone, lest she sink too far down. The area is part of a network of bogs, including nearby Molly’s Bog, which is owned and maintained by the University of Vermont.

Though the Stowe Land Trust’s conservation efforts will ensure that the Ricketson farm will remain farmland with or without the family, the effort honors the legacy of the Ricketson family in Stowe.

Both Arnold and Harold Ricketson served stints on the Stowe Selectboard. Though the farm exists on the periphery of both Stowe and Morrisville, the family has always identified firmly with Stowe.

In an interview for the Stowe Speaks oral history project conducted by the Stowe Historical Society in 2011, Kenneth and Harold Ricketson spoke of growing up in a Lamoille County where the line between Morrisville and Stowe was far less permeable than it is today.

“I think Morrisville was more commercial, more business,” Kenneth said. Stowe was still the agrarian heart of the region when he was growing up in the first half of the 20th century.

As far as the two brothers remembered, the land was farmed for at least 150 years before their father Arnold purchased it with a sizable inheritance their mother received, which covered most of the cost.

Much of their childhood revolved around milking the herd, both in the early mornings before attending school and in the evenings when they returned home. A goat-powered separator removed the cream from the milk, which was then shipped to Morrisville. Its operator knocked Kenneth to the ground on at least one occasion

In the 1920s, the Ricketson’s milk was sent in cans to Waterbury before being shipped to Boston. Due to the position of their property between the two major villages in the region, their farm was one of the first to be electrified.

The brothers remembered building ski jumps they ran on hickory skis in the winter and bicycle riding with the neighbors in the summer when they weren’t working, which was most of the time.

A great deal of the Stowe Kenneth and Harold grew up in has changed irrevocably with the growing development demand, the rise of the ski industry and the unceasing march of modernity. But if the Stowe Land Trust’s fundraising goals are met, this heart of that world will be preserved for future generations.