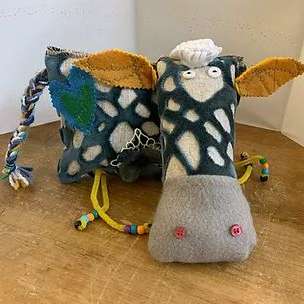 By Brent Hallenbeck. Published in the Burlington Free Press on 2/2/2022.

Wanna buy a cow for 25 bucks? They're for sale in Stowe to help preserve farmland.

To try and save one of the few remaining farms in Stowe, an organization is turning to the ones who know the farmland like the backs of their hooves.

More specifically, cows created from donated and recycled material will be offered for a minimum $25 donation to benefit the Stowe Land Trust’s effort to preserve the Ricketson Farm on the north side of town. The Current, a nonprofit arts organization in Stowe, is leading the effort dubbed “Cows for a Cause.”

The idea began by trying to connect the ideas of recycling, conservation and social responsibility for a curriculum being developed for a winter youth-education class titled “Upcycled Creations,” according to Renee Mitchell, program manager for education and advancement at The Current.

“It just hit me – teaching kids to make these adorable cows from donated and recycled materials to benefit the conservation efforts of a former dairy farm in our town was a natural go-together,” Mitchell said in a news release from The Current.

Stowe Land Trust announced in the fall that it has joined with the Vermont Land Trust to try to preserve the 115-acre Ricketson Farm, which has been in the family for more than a century. “The Ricketson Farm is in transition and at risk of being lost forever to development if the farmland is not protected now,” according to the news release from The Current.

The land trusts have made “terrific progress” toward raising the $2.5 million needed to conserve the farm, according to The Current. More than 400 community members have donated to the cause, which has also been awarded $1.2 million in state and federal funding and is awaiting a $200,000 contribution from Stowe that is included in the town’s proposed municipal capital budget to be voted on March 1, Town Meeting Day. Owner Ken Ricketson has also made “a significant donation,” according to The Current.

The arts center is organizing a February vacation-week family drop-in workshop for community members to come in and create more “Cows for the Cause.”