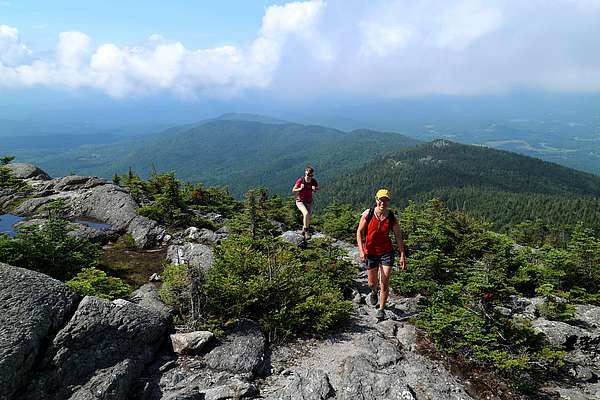 Kristen & Metzi coming up to the summit of Hunger Mountain 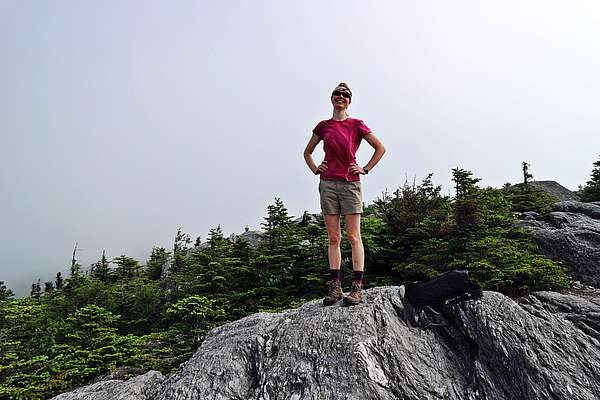 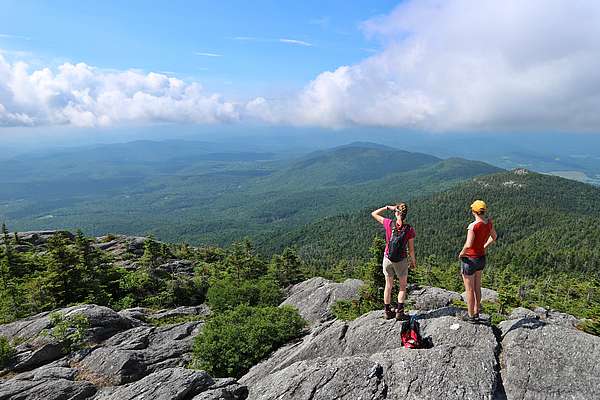 Metzi & Kristen looking towards Middlesex and admiring a large swath of forest. 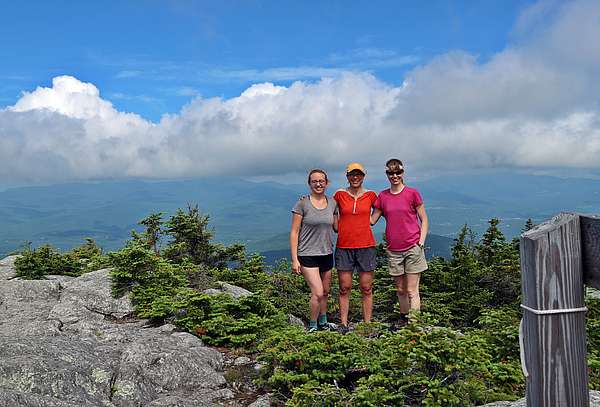 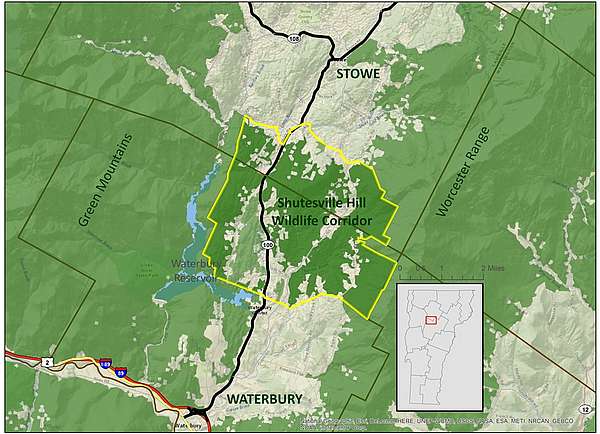 Forecast: 90 degrees and sun. Being a New England girl did not prepare me for extreme heat – I tend to melt when temperatures even threaten to cross over 80 degrees and the apocalyptic heat wave at the beginning of July was really starting to test my endurance.

Nevertheless, we at Stowe Land Trust had scheduled our staff outing for July 3rd and were going to hike high up into the Worcester Range. The goal was simple: scout out a beautiful mountain range, get some exercise, and see two of our current projects in the flesh. The Worcester Range is a key meeting point for the Hunger Mountain Headwaters project and the Shutesville Hill Wildlife Corridor.

Dripping but gleeful we clambered our way up the side of Hunger Mountain. Advantages to hiking on a super-heated Tuesday include extra bragging rights, and very little competition for the trail or the summit. We attained the summit in good order and that’s when things really started looking up. A glorious, knock-your-hat-off breeze swept past us as we came out of tree cover. We were high enough to be above the sweaty, buzzing temperatures of the valley. The atmosphere is typically 3 degrees cooler for every 1000’ feet gained in elevation. That put Hunger Mountain solidly in the low 80s with a heartening headwind.

The summit of Hunger Mountain is a beautiful expanse of bedrock dotted with stumpy krumholtz which easily rivals its larger mountainous cousins to the west.

Krumholtz, or crooked wood in German, are the deformed spruce found at high elevations. Constant wind and ice in the winter thwart growth and twist the trees into intriguing shapes.

Juncos sang to us from their perches and the sedge waved happily in the wind. Rock-hopping our way across the summit cone we faced south, admiring the unbroken line of spruce blanketing the shoulder of the Worcester Range.

From the summit of Hunger Mountain the difference is striking between its nearly undeveloped eastern slope and its western slope which has been subdivided down much more. The Worcester range sits in a critical location for wildlife movement in the region. The Shutesville Hill Wildlife Corridor (SHWC) connects the Worcester Range to the Green Mountains via the last mostly undeveloped stretch of land across the Rt. 100 corridor in that area. Just along the border between Stowe and Waterbury is the chance to protect forest for the benefit of the bears and the moose and the coyotes that knew this land was home before we all discovered it. In an impressive challenge to partnership, the SHWC straddles two towns, multiple conservation non-profits, and a whole lot of property owners as it makes its way across the landscape.

On our journey through the mountains we saw evidence of moose and coyote along the trail. These large mammals need room to roam – a female moose’s range is typically six square miles, and a male black bear ranges eight to fifteen miles within his territory! It’s important to give these animals a chance to cross from one mountain range to another.

Sixty percent of the lower slopes of this mountain range is still at risk of parcelization and development.

We want bears to have the ability to find a wide open, un-populated territory so that they don’t start interfering with human activity in town. It’s cute to see a black bear cub on your back deck, but bears that become habituated to people often need to be put down. Preserving a line from the Green Mountains to the Worcester range gives these creatures the opportunity to move on and find appropriate greener pastures on the other side.

The Worcester Range is a unique opportunity to affect small changes here in our community that will have repercussions across the landscape. The 45,000+ acre Worcester Range forest block is part of a globally important breeding bird area for forest songbirds including Bicknell’s Thrush, and an internationally important wildlife linkage as identified by the Staying Connected Initiative. If you haven't ever hiked up into the mountains in the Worcester range, we highly recommend it. It is a spectacular reminder that beautifully wild places still exist around us. From the top of Hunger Mountain you may only be two miles from your car - but it feels as though you're in another world. More so than a hike up Mt. Mansfield or Camel's Hump, the quiet, slower pace of the Worcesters provides us all an escape from the heat and crowds of town.