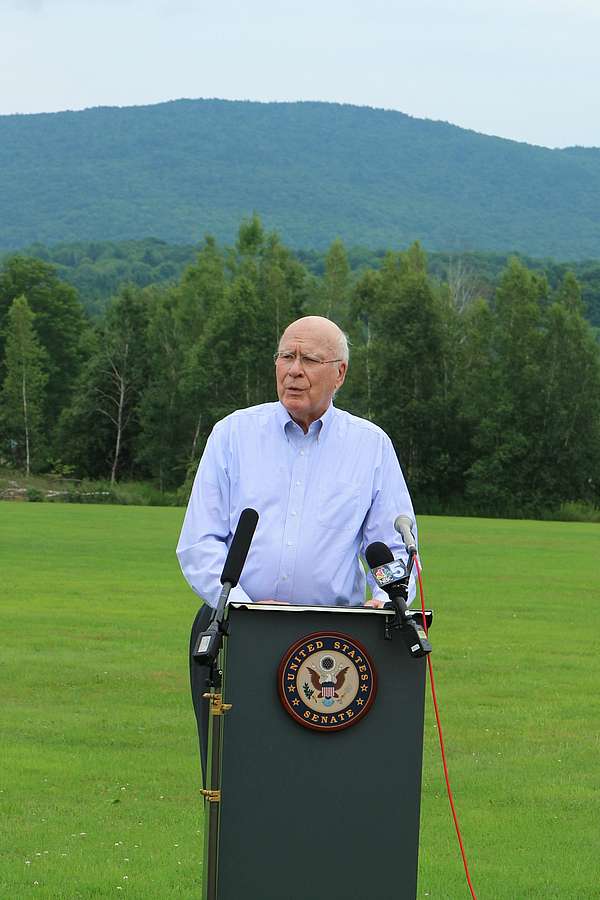 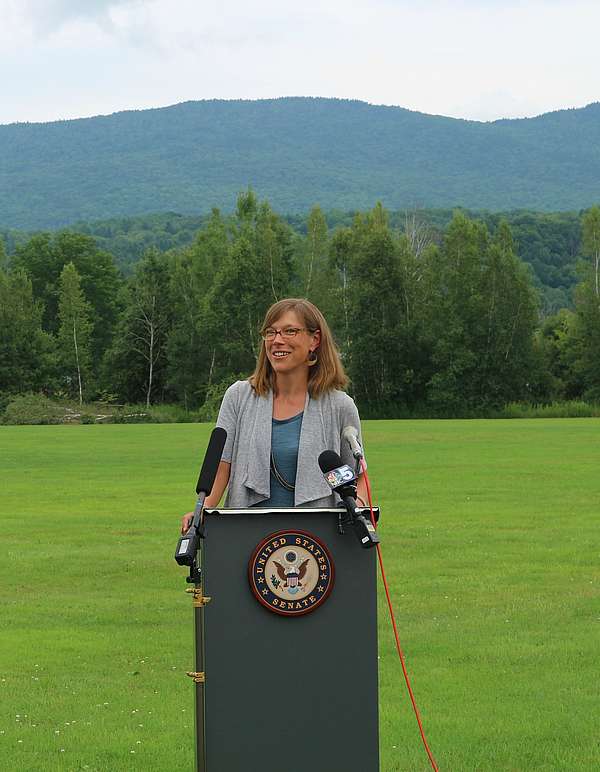 Stowe Land Trust Executive Director, Kristen Sharpless, expressed the value of organizations banding together for the common cause of conserving land.

Addressing a crowd of approximately 30 people at Hope Davey Memorial Park on Maple Street, which has views of the land to be preserved, Leahy spoke of how he got the money into the budget and also of the importance of conserving land.

The chairman of the Senate Appropriations Committee, Leahy told the gathering that the Trump administration had removed all money for land conservation from the most recent federal budget. “I was there when President Trump sought to eliminate it in the 2018-19 budget. He zeroed it out,” Leahy said. “I said, ‘I have a little amendment.’” The amendment was to allocate $67 million to conserve land throughout the United States, including in Middlesex, the senator’s home town.

Among other reasons to do so, according to Leahy, the “outdoor economy” generates $5.5 billion and supports 50,000 Vermont jobs, particularly in the Stowe and Waterbury areas.

This funding, through the Forest Legacy program for the Hunger Mountain Headwaters, will conserve land with popular hiking trails with access to Mt Hunger and the Stowe Pinnacle Trail.

“It is not only for the people of my generation, but my children, grandchildren and generations to come. If you don’t protect it, it will get developed and you don’t get it back,” Leahy said.

Ellms thanked Leahy for being a “strong and dignified” voice for Vermonters. He then outlined how the outdoor industry generates billions of dollars in economic activity from hunting, fishing, skiing, hiking and mountain biking. Access to unspoiled land is critical to these avocations, he said, and land conservation is necessary to provide such access. Also, keeping the land open and approachable promotes healthy living and higher property values, Ellms said.

Next to speak was Kristen Sharpless of the Stowe Land Trust. She said her organization had typically been oriented toward Stowe’s Mount Mansfield, but she also has an appreciation for the conserved land she called “The Worcesters.”

“It is a quieter, more remote place. We view Mt. Hunger as being our community’s playground as well,” Sharpless said. She went on to express the value of organizations banding together for the common cause of conserving land, including a special appreciation for private landowners.

Also tipping his hat to private landowners was Michael Snyder, Commissioner of the Vermont Department of Forests, Parks and Recreation. He went on to describe the natural resources that benefit from conservation, including the Hunger Mountain Headwaters, brook trout streams and unspoiled habitat. “This is a functional landscape,” said Snyder, who thinks of the word “forest” as a verb rather than a noun “because of all they do” such as providing a natural infrastructure that keeps people healthy, and keeps people connected to both the land and to each other.

The Forest Legacy Program was created by Leahy in the 1990 Farm Bill and has conserved 90,000 acres of forestland since its creation, and more than 2.75 million acres nationwide, according to a press release.

More information about fundraising for the Hunger Mountain Headwaters project can be found at www.stowelandtrust.org/current/.