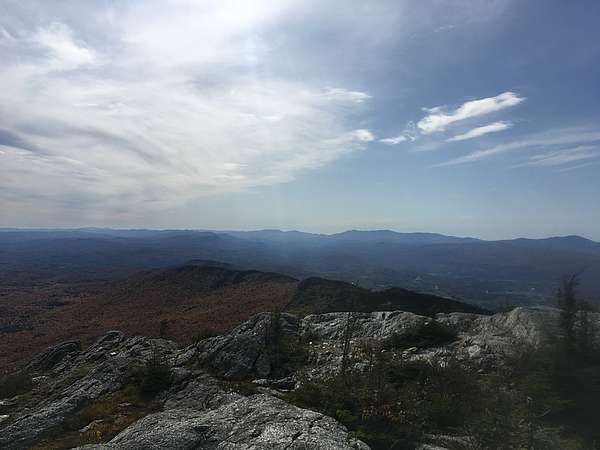 View from the top of Hunger Mountain, one of the most popular day hikes in central Vermont.

The C.C. Putnam State Forest just got considerably bigger and the Worcester Range is now safer thanks to a collaborative effort and $3.5 million in public and private financing.

The Trust for Public Land, working in conjunction with the Stowe Land Trust and the state Department of Forests, Parks and Recreation announced the protection of the “Hunger Mountain Headwaters” – 1,877 acres of land in Stowe, Middlesex and Worcester – this week.

That’s been the goal for some time, according to Kate Wanner, project Manager for the Trust for Public Land, who noted the newly protected properties host the approach trail, from the east side of the Worcester Range, to Hunger Mountain and White Rock Mountain – described as “two of the most popular day hikes in central Vermont.”

“Wild and remote outdoor experiences are part of what make Vermont a great place for visitors and residents alike,” she said. “This expansion of protection of the Worcester Range – one of the only undeveloped mountain ranges without a ski area or bisecting roads – will safeguard that sense of wildness and exceptional outdoor experiences just minutes away from the capital, and the recreational hubs of Waterbury and Stowe.

“During this time of uncertainty, access to trails and vast public lands will be essential part of our mental and emotional health, recovery, allowing us to reconnect to nature and our community,” Wanner added.

Though all but 109 acres of the now-protected land is located in Middlesex and Worcester, the Stowe Land Trust played a key role in what Executive Director Kristen Sharpless described as a “landscape-scale conservation effort.”

It’s one, Sharpless said, underscores how much the greater Stowe community values “… the vastness and wild character of the Worcester Range.”

Sharpless stressed it was a team effort.

“We are grateful to landowners, like Charlie and Gibbs Berry, whose vision and generous action in conserving their land makes efforts like these possible along with the Forest Legacy Program and many private foundations and individuals who helped to fund the project,” she said.

The 109 acres protected in Stowe was previously owned by the Berrys and also falls within the Shutesville Hill Wildlife Corridor.

Sharpless said the Stowe Land Trust has simultaneously been working with other local and statewide partners to protect to protect the “internationally-important wildlife corridor,” which connects the Worcester Range and the Green Mountains.