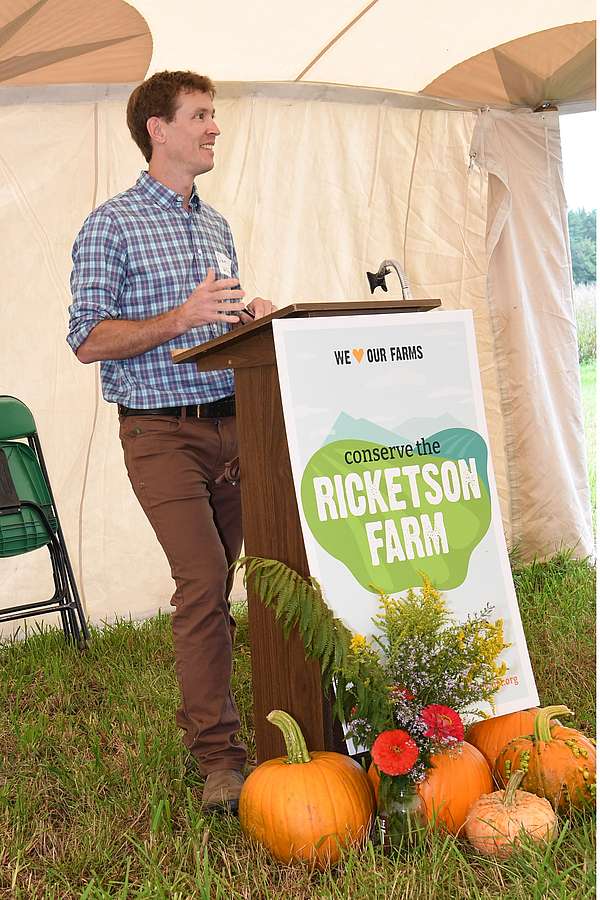 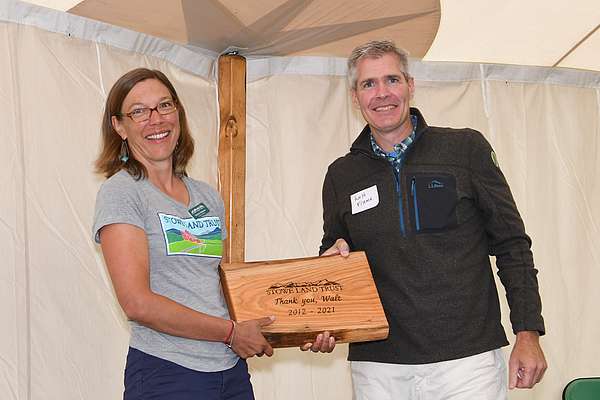 Executive Director, Kristen Sharpless, presents Walter Frame with a gift for his 9 years of service on the Stowe Land Trust Board of Directors. 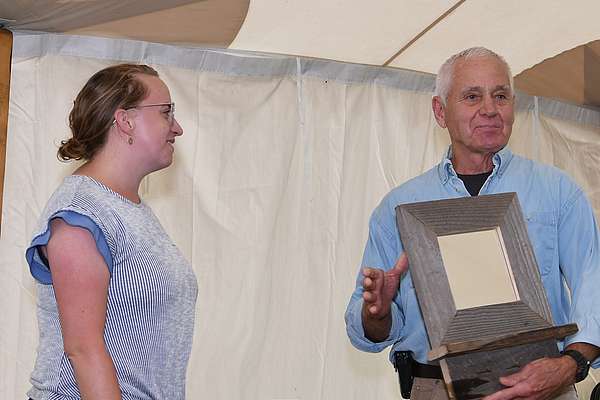 On September 12th, Stowe Land Trust held its 34th annual meeting. The event was held at the conserved Joe's Pond property in Morrisville where community members gathered under a big tent and enjoyed views of the beautiful pond and farm fields.

Dave recognized and thanked board members terming off for their many years of service: Chess Brownell, Walt Frame, Tom Jackman, Mila Lonetto and Jed Lipsky, who termed off last year. Board members were presented with engraved wood made by an artist from locally grown oak. Chess Brownell and Walt Frame were elected Stowe Land Trust Directors Emeriti by the Board in August. The 2021 Volunteer of the Year award was presented to Tom Hamilton who has been diligently brush hogging and mowing DuMont Meadow for more than 10 years. He was presented with a mirror framed with wood salvaged from the old Kirchner Woods sugarhouse and made by local students.

Two new board members were elected by SLT’s membership at the annual meeting. Stowe community members Amy Farley and Frank Foti will join eighteen existing board members responsible for governing the organization. Each year SLT has a limited number of openings available in its all-volunteer board. New members are recruited based upon an identified need within the organization.

Guest speaker, Theresa Snow of Salvation Farms, spoke about  building resilience in our local food systems. Afterward, everyone enjoyed delicious ice cream provided by Sisters of Anarchy. Many thanks to the following partners who shared their exhibits with event attendees: the Noyes House Museum for their information about Joseph Susap, a Mi’kmaq from Nova Scotia who Joe's Pond is named after, and the Stowe Historical Society for sharing information about the present day Ricketson Farm.

Thank you to Rich Levine for capturing these great photos and to all of our amazing volunteers for making this event possible!